The Killers Are Coming!

In case you haven’t heard, something BIG is happening at Harrah’s Resort SoCal this weekend. Las Vegas “rock royalty” The Killers will be bringing their electrifying rock sound to The Events Center stage! Known as one of the biggest rock bands of the 21st Century, The Killers have sold more than 22 million albums worldwide and have headlined shows at some of the most sought after venues in the world.

Which explains why tickets for our all-ages show sold out in less than 45 minutes! It is safe to say that this is one of the most anticipated concerts we have had the pleasure of hosting.

Those of you lucky enough to call yourselves ticket holders are in for an epic night of music, starting with The New Regime as the opening act. The music of this one-man-band is all written and played by Ilan Rubin who has worked with music icons like Nine Inch Nails and Paramore. Rubin is now working solo as The New Regime and is thrilled to be kicking off the night for The Killers.

While we love the success of a sold out show, we wanted to spread the love across the resort to all of our guests. The Events Center is not the only venue where you’ll find rock and roll on April 2. We’ve got free music, tons of rock-themed food and drink specials and ample opportunities for fun all day long.

Spiked, Courtside and Corked are all serving a music-themed specialty throughout the day. Ask your bartender for a Mr. Brightside, a delicious vodka drink featuring Cointreau and a violette liqueur. This brilliant beverage is only available the day of the show—so get one (or three) while you can.

To feed your star-studded appetite stop by ‘ritas Cantina for a Savory Scallop Tostada Trio paired with our rock-show-themed Rockin’ ‘ritanator.

But the real fun starts in The Courtyard at 2pm. Join us for FREE live music including a mix of DJ’s and rock bands. We’ll also have more food and beer specials to keep your party going. This pre-pre show will last until 7:45pm. Don’t worry, no ticket is necessary!

Though the main event kicks off at 8pm in The Events Center, the fun doesn’t end when the curtain goes down! Some of the bands performing throughout the day will be jumping back on stage at the Courtyard when the concert ends.

Saturday is sure to be a packed with Harrah’s Resort SoCal style fun. Even if you don’t have a golden ticket to see The Killers live, there’re plenty of ways to make it a day to remember. And who knows, maybe you’ll run into a band member on the way to the bathroom! 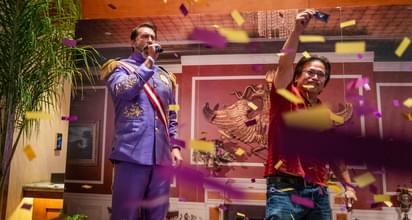 The Mayor of Funner showers his residents in fun
Read More
Put your fun to work!